What is normal force?

However, when two surfaces are in contact (e.g. a box and a table) they exert a normal force on each other, perpendicular to the contacting surfaces. This normal force will be as large as necessary to prevent the surfaces from penetrating each other.

[Why does the table look curved in the image below?]

The word “normal” in normal force is not referring to ordinary or commonplace. The “normal” here refers to perpendicular. This is because the normal force, usually represented with just NNN, is a force that is directed perpendicular to the two surfaces in contact. It makes sense that the force is perpendicular to the surface since the normal force is what prevents solid objects from passing through each other. Surfaces can also exert contact forces in the direction parallel to the surfaces, but we would typically call those forces frictional forces (since they work to prevent the surfaces from sliding across each other) instead of calling them normal forces.

How do inanimate surfaces “know” to exert a normal force?

It makes sense for most people that a person would have to exert an upward force with their hands when carrying a heavy bag of dog food as seen in Figure 3(a) below.
But some people find it hard to believe that an inanimate object like a table can exert an upward normal force on a bag of dog food as seen in Figure 3(b) seen below. Sometimes people believe that the table is not really exerting an upward force at all, but merely “getting in the way” of the dog food falling down. But that’s not how Newton’s laws work. If there was only a downward force of gravity on the dog food, the dog food would have to accelerate downward. The table must do more than “get in the way”. The table must exert an upward force to prevent the dog food from falling through the table.
Strangely, if a heavier object is placed on a table, the table must exert more normal force to prevent the weight from passing through the table. How does the table know to exert just the right amount of force to prevent the object from passing through it?
Essentially, the table “knows” how much force to exert based on how much the surface/object is compressed or deformed. When solid objects deform they typically try to restore themselves and “spring back” to their natural shape. The heavier the weight, the greater the deformation, the greater the restoring force trying to bring the surface back to its natural shape. This deformation would be noticeable if the load were placed on a card table, but even rigid objects deform when a force is applied to them. Unless the object is deformed beyond its limit, it will exert a restoring force much like a deformed spring (or trampoline or diving board). So when the load is placed on the table, the table sags until the restoring force becomes as large as the weight of the load. At this point the net external force on the load is zero. That is the situation when the load is stationary on the table. The table sags quickly, and the sag is slight so we typically do not notice it. 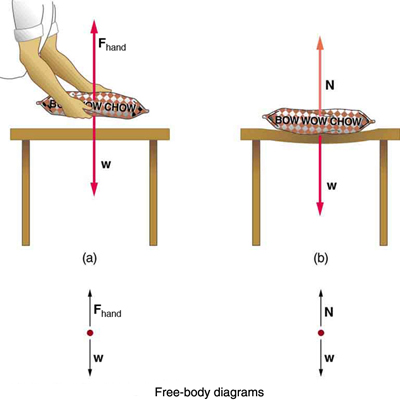